A hillbilly space elf named Christine is arrested for collaborating with a despotic Shogun who is conquering the galaxy. After having a bomb installed in her skull, Christine is given a chance at redemption by braving a treacherous planet in search of a powerful artifact.

Arkista’s Ring is a nonlinear sci-fi fantasy adventure where you choose your path through the game. Doors open via single-use keys, and some paths to the end are easier than others. Wield a vast array of sci-fi weaponry and fantastical artifacts against the strangest creatures in the galaxy.

The Cronus Camp for Wayward Boys

Based on Sneaky Doom by Josh771

Play a young boy sent to a reeducation camp what may be run by irresponsible cultists. Rely on being small, silent, and hidden in darkness to survive, or use booby traps, fire extinguishers, and big, loud guns if that doesn’t work out so well.

Re-live the sci-fi classic in MurphyVision(tm)!

Play as Officer Alex Murphy and regain your humanity while seeking revenge against the criminal scum who killed you. Features weapons, villains, and music from the cult classic film! 16 levels of brutal law enforcement! I’d buy that for a dollar!

A Lovecraftian Mod For GZDOOM

Includes an 8-Level Demo for Doom 2

The “Guns Only” version for use with other Doom Wads

It is 1932, and you, Henry Annesly, have just shot your old colleague Crawford in his castle. Now his monstrous servants are enraged, and his resonance engine is splitting the very fabric of the universe, merging the castle with the alien worlds that coexist with the earth! Your only hope now is to shoot your way to the upper levels of the castle and shut down the machine before all existence is reduced to pandemonium!

FEARS is a remake of the Amiga shooter of the same name. Use your flashlight to illuminate the ever-present darkness and blast beings from your worst nightmares.

DO NOT USE BOLOGNESE GORE MOD! IT BREAKS THE GAME!

Juno is drafted by her government to destroy an enemy operation centered around a stealth submarine which could allow two maniacs to dominate the globe. The mission is somewhat personal for Juno, as one of those maniacs is an old rival with a score to settle.

Includes new maps, weapons, and enemies in a modified Junoverse (Project Einherjar, Midgard Outlaw). All maps are adapted from Operation Arctic Wolf and remade from scratch for improved, streamlined gameplay and a more cinematic experience.

Originally made for the first NaNoWadMo 2018! 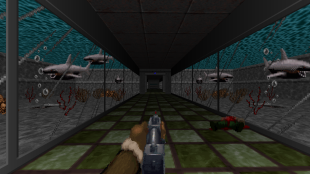 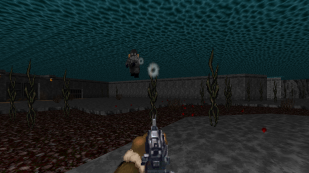 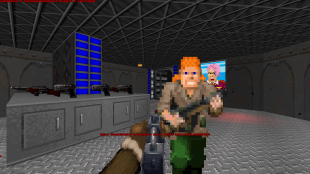 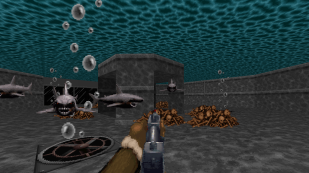 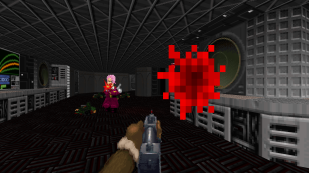 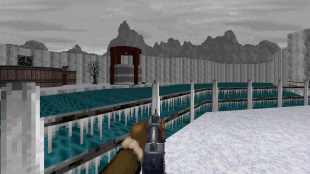 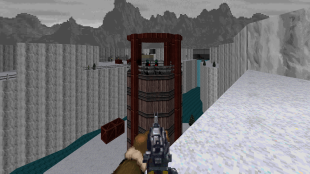 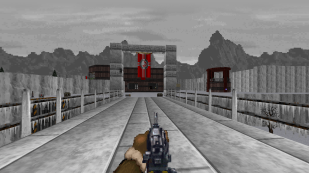 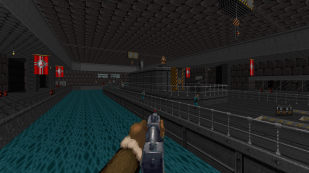 Play as Mick Chaos, brother to the slightly demented Dr. Chaos, and shoot your way through three action/puzzle maps as you solve whatever weird inter-dimensional kerfuffle the good doctor has caused this time. Features a new weapon and a new monster. Read the included pdf for the detailed story, helpful clues, and useless trivia.

Bungalow of Dr. Chaos – Mick returns from the Great War to find a letter waiting for him from his brother Dr. Chaos, begging for his help in closing a series of unstable dimensional portals.

Dr. Chaos Strikes Back – Mick is perturbed to learn that the Turkish bath he helped Dr. Chaos build is being used by the doctor to deliver water to a dying desert planet, with predictable space-time continuum disrupting results. Now the bath house/dimensional engine has gone haywire and must be shut down before worlds collide.

City of Chaos – Mick accidentally breaks a delicate dimensional device in the city of Dander, Norway and splits the city into three different timelines. He must explore them to find the missing pieces of the machine and restore the space-time continuum. 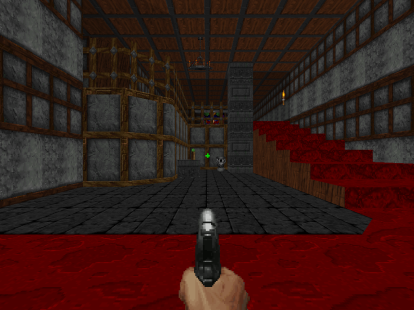 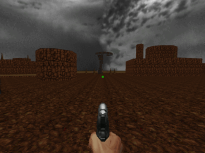 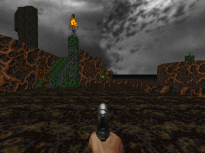 Mickey Chaos has his hands full once again. His brother Dr. Chaos has taken their sister Didi on an expedition to ancient Mars, back when the planet was teeming with life. Unfortunately the martian locals stole the Flux Accelerator’s five “time batteries”, stranding Didi on an alien planet with no way back home. With only enough juice left for a one-way trip, Mickey now must collect the batteries, repair the Accelerator, and bring Didi back to earth before Mom has a heart attack.

Four more maps to explore hub-style: a treacherous valley split by countless waterfalls, an ancient city collapsing into lava, a decrepit castle full of cultists, and a vast underground cannibal lair. Several new enemies, including dinosaurs! Use the Tome of Power to turn Mickey’s Colt .45 into a crowd-shredding Tommy Gun! 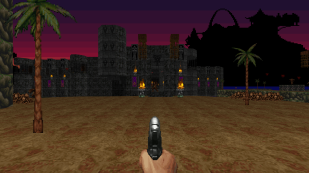 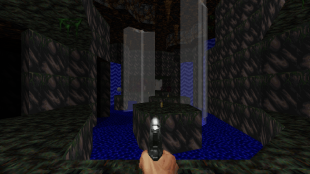 The HORUS terrorist group has just made super-terrorist Victor Baloch its new leader, and they’ve stolen several nuclear warheads. With the nukes in tow, they’ve begun holding the world hostage one region at a time.

In response to this, NATO has greenlit a campaign to eradicate HORUS and Victor once and for all, with the Hercules of counter-terrorism Hector Juarez taking point. Operation Body Count is a go.

The original Operation Body Count could have been Jihadenstein, but was instead a pile of crap. The mod ended up being an amalgamation of missions based on other games about terrorist takeovers: Hostages, Persian Gulf Inferno, and Alcatraz to name a few. Each mission is a single map filled with various objectives and nasty terrorists, often inspired by other games of the same era that revolved around terrorist threats. 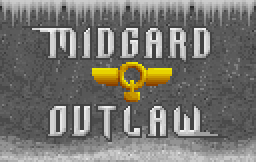 The Sequel to Project Einherjar, based on Winter Agent Juno

Now retired after saving the world from nuclear disaster, Juno Radcliffe is asked to help escort dangerous war criminal Dietrich Drogo to Normandy, to be tried for crimes against humanity. Once in Normandy, the caravan is hit, Drogo is rescued by his fellow war profiteers…and Juno takes the blame. Now Public Enemy Number One in a foreign country, Juno must hunt and recapture Drogo to clear her name.

I had thought about a sequel to Project Einherjar for some time, but more importantly, a game experience that better encompassed the essence of the book series it was based on. Whenever I edit my fiction, I listen to a music playlist that suits the mood of the piece, to fuel my drive to finish the project. I thought it would be cool to use that music in a game project to help bring Winter Agent Juno alive the way I envisioned it. So I built Midgard Outlaw around the dynamic music mechanic, using music directly from my WAJ inspirational playlist, and toned down the sci-fi elements considerably. I’m really happy with the end result and hope you guys and dolls enjoy it, too.

This does mean that youtube will likely de-monetize videos of this mod due to the music used, so Let’s Play only if you really feel up to it.

For Heretic and Gzdoom

Save your prom date (and the rest of the school) from an ill-timed ghoulish apocalypse. Solve puzzles with your brain and hit undead monsters with your bat. Talk to people and friendly monsters for clues and important items.

Based on Scott Marshall’s NES game of the same name, and tries to stay true to his original vision to the best of its ability. Maybe. I dunno, maybe it’s way off. It’s fun anyhow. 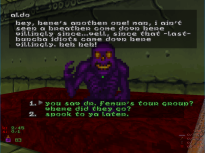 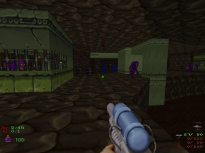 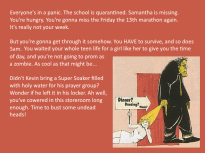 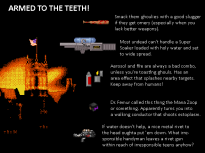 In 2015 Doomworld had a collaborative megawad project called Mayhem 1500, for which I submitted Map 06: Castle Bathory, and also volunteered to write the intermission screens.

‘Don’t worry,’ Dr. Rubik had said.
‘It’s all perfectly safe. We just need
a volunteer to help calibrate the Cronus
Drive’s new OS. Just step in for 1500
cycles and we’re all done.’
‘How long is 1500 cycles?’ you’d asked.
The doc shrugged. ‘Eight seconds?’
‘What, you’re not sure?’
‘Look, you want your six grand or not?’

Eight seconds your ass. That was six
days, eight hundred demons, a thousand
gun-toting crazies, and one giant god-
damned vampire ago. Now you’re god-knows
how many centuries in the past, staring
at a river of lava that goes on forever,
wondering when one of these damn time
rifts will take you back home, to your
six grand and Dr. Rubik’s ass-whooping.

You remember a lot of important events
happening in the year 1500, like Portugal
discovering Brazil, and wolves going ex-
tinct in England. Add seven shit-tons
of demonic meatbabies to the extinct list,
Hot Junior High History Teacher. What was
her name? Miss Hanson? Miss Hershberger?

You think you see an old, crumbling fort-
ress in the distant marsh, hiding in the
mossy mountains. Maybe your ticket home
is there. Or shit-tons more monsters.
Can’t say this trip through time and
space has been boring, at least.

It’s dinnertime on present-day earth,
according to your useless watch.

Taking a smoke break on the ledge of the
old keep, tossing a demon skull into the
moat below, you chuckle and think of Toni,
your ex-girlfriend. Crazy bitch would be
all snark and smiles one minute, flinging
kitchenware at your head the next. This
timewarp’s mood swings make Toni look
like a well-adjusted saint.

Each time you go through a portal, the
locale gets weirder, more alien. You
aren’t even sure you’re on earth anymore.
Could that possibly mean you’re getting
closer to your goal? The return to Dr.
Rubik’s lab, where your next rent payment
awaits? Or are you just burrowing through
time and space, digging deeper and deeper
into Hell itself?

‘Look, you want your six grand or not?’,
says Dr. Rubik to your past self as you
step into his lab. All eyes are on you,
gun smoking, jumpsuit bathed in blood.
You don’t hesitate vaporizing the doc’s
head. The lab techies go next, then
the Cronus Drive, all while your past
self screams horrified obscenities.

Then…nothing happens. Preventing the
experiment SHOULD have undone the dis-
aster and sent you home…unless the
‘Drive merely stranded you in a new
and now very doomed timeline.

‘Fuck my life,’ your past and present
selves mutter, as security hauls you
both in for questioning.

You found the secret level! Some-
thing about this place strikes you
with a powerful sense of deja vu.

You found the super secret level!

Seriously, what’s wrong with you?
Was this megawad not hard enough
for you? Haven’t you learned your
lesson yet?

See a counselor, for god’s sake.