Sammy Steel US vs UK

I finally got my hands on some of the UK variants of Sammy Steel, and have put together a proper photo comparison. My UK variants are missing some pieces, including both Sammies.

For whatever reason, the Vicious Volcano exterior was given the Face Mountain interior in the UK. The paint is glossier inside and out, and makes the little valley seem lusher and possibly mossier, compared to the more barren valley of the US version. The UK caveman looks friendlier and has blonde hair, and is made of a much more flexible rubber than the second-gen US caveman (the first-gen caveman was of the same hard plastic as the playset itself, and painted badly). You can also see that the decals are much more cartoonish, and the lake features a goofy sea serpent for some reason. 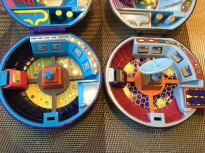 UK Sinister Saucer is purple on the outside (the UK Dome of Doom is black) and once again has more cartoonish decals inside. The UK variant’s floor depicts a kind of star chart, which isn’t as cool as the US variant’s “transparent” floor showing off the passing galaxy outside. The villains appear to be bizarro twins with more-or-less opposite colorschemes. My UK ‘Saucer is missing the radar dish and the spaceship/landing pad setup.

Years ago I somehow ended up with two spare Sammy Steel figures from Series 3. They both have homes now.

I’m not sure how much different Series 2 and 3 were in the UK, since the only ones I’ve ever seen are possibly bootlegs:

When compared to mine, the only difference is the tiny boat in the playset to the left. But again, these lack the Imperial Toys logo, so they might not be official.

UPDATE: Here are photos of a Dome of Doom variant courtesy of generous donator Enrique.

2 comments on “Sammy Steel US vs UK”