Since I ran out of Mighty Max to collect, I finally broke down and turned my eye to Polly Pocket. Honestly even as a kid I would’ve loved a few Pollies on my shelf: it’d be nice for Max to have a regular house, where further trouble could arise (mini-zombie outbreak anyone?).

No sooner do I start browsing Polly Pocket listings, however, am I hit with a plethora of endearing little knockoffs. Among them is the My Little Fairy Tale line, apparently reissued later as the color variant My Secret Fairy Tale (or maybe that’s its UK name). Whatever the label, it’s a series of heart-shaped playsets for girls depicting classic fairy tales such as Snow White, Cinderella, Sleeping Beauty, Red Riding Hood, Goldilocks and the Three Bears, and Pocahontas.

Okay, that last one makes it clear they’re based on Disney’s take on these stories. But they’re rather cute to behold regardless.

I’ve ordered most of the toy line so far: Red Riding Hood (pictured above), Goldilocks, Snow White, and Cinderella. The first to arrive was Red, broken front door and all. Everything else was intact, though, and the bed comes with a cloth comforter for concealing the wolf up to his beady little eyes. “Hue hue hue” he seems to chortle…

The faces on these figures are wonderfully detailed and expressive. The overall figure designs are really nice — they’re essentially the highlight of this toy line, with most of the interiors being somewhat dull. I like Grandma’s quaint cottage though with the cloth bedsheets and kickass merry-go-round dining table that Red surely spins herself sick on every time she visits.

One of the most detailed playsets of the whole line is Goldilocks. While most of these toys give the general impression of the classic stories they’re based on, this one actually reproduces it scene by scene: entering the house, the three bowls, the three chairs, and the three beds. The figures are once again very cute, though Goldie is the only one who scored a paint job. Maybe that’s why the bears are leering at her jealously…

Snow White’s interior is more in line with the rest of the toys: not a whole lot going on apart from a cute minecart that rides the rails. It’s a quaint environment with little to do with the story itself. But the figures are some of the most endearing, especially the bunched up little dwarfs.

EDIT: I’ve since added Cinderella to the collection. 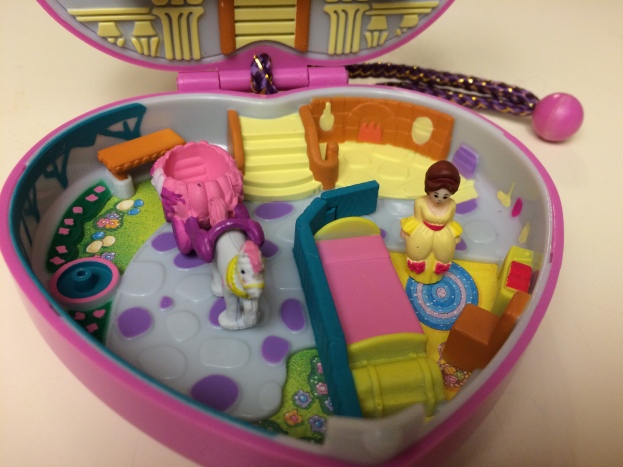 This one is from the My Secret Fairy Tale variant, though I don’t know if there is any stylistic difference between this one and the My Little version. Still it comes with an adorable horse and pumpkin carriage, and Cindy herself is precious. Also the interior is pretty bland, like most of the toys.

EDIT 2: Finally acquired a complete (?) set of Sleeping Beauty, the rarest one of the line!

The set evidently also came with a little frog, but I’ll settle for 90% complete. The backdrop changes from an active castle community to a vine-entrapped castle with everyone suffering from a magical nap. The tower is an interesting piece that attaches to the stairs when the set is open, and fits over the pond when stored away.

Beauty is the cutest of all the dolls, and makes for a great Mighty Max damsel. 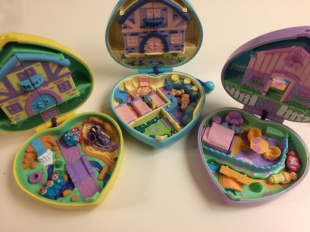 All the playsets have houses in the background that open into little vanity mirrors. Though these all look like the same background recycled for each set, there are subtle differences to each, mainly in the little logo at the top of each house marking which fairy tale was being represented: a bear for Goldilocks, an apple for Snow White, a pic-a-nick basket for Red Riding Hood, and a slipper for Cinderella.

Once I got Cinderella, though, I noticed something I hadn’t before: these toys are battery operated, and the buttons above the castles/houses in the background light up the mirror to reveal a hidden image. You can see a glimpse of the Cinderella image here:

Of course, I can’t put batteries in these until I find my Phillips screwdriver…

Whether the environments are any good or not, the figures are the main draw. They’re cute as hell and have wonderfully detailed and emotive faces. The chief figure from the Pocahontas set has the most amazing “old american indian man” face for how tiny the figure is (not pictured here sadly). 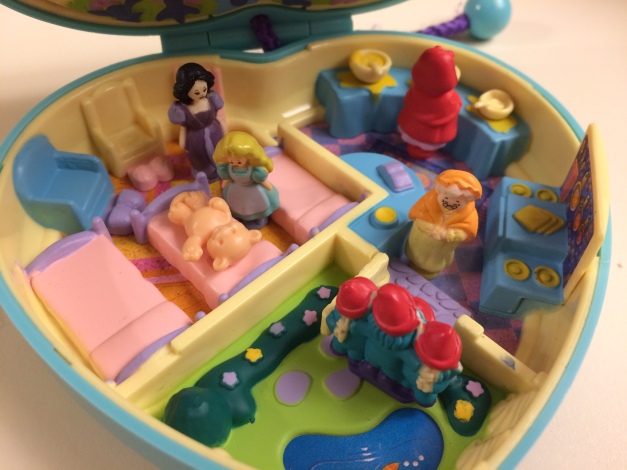 If you have all these sets, you’ll likely just have everyone hang out at the three bears’ house, since there’s actually stuff to do there.

Oh, there were also lockets with figure variants. And sometimes they made these big sets with everything plus a bonus hair clip.

But that’s not nearly as interesting as combining them with Mighty Max to re-enact John Carpenter movies.