Imagine my surprise when I browsed the Big Lots toy aisle (back when it was called MacFrugal’s) and discovered NEW Sammy Steel toys — four more playsets to double my collection. While the line was and still is a Mighty Max knockoff, I can’t say I’m not impressed with how far they were willing to carry the franchise.

Series 2 (the rectangular sets) is probably my favorite Sammy Steel series, although it’s hard to gauge whether it’s better than Series 1 or not. The Series 2 locales are more creative and feature greater variety, whereas Series 1 groups its playsets into “prehistoric” and “sci-fi” pairs. You get more stuff, too — three times the stuff, in fact — but the figures themselves aren’t as good and the paint/decal application is sloppier, which makes Series 2 manage to look cheaper than Series 1. And in all four sets, the chief villain is the same: the flamboyant purple-suited Death Star gunner, and his twin brother.

One area in which Series 2 definitely trumps Series 1, though: the compact exteriors are certainly more interesting. Two are “disguised” as Walkmans, and two as Gameboys. Each of the latter two goes as far as sporting a unique decal on its screen, so it appears to be running the demo for a Sammy Steel lcd game based on its respective playset. An extremely cool artistic touch.

I believe the cardback comics of Series 2 also told a linear story, but I don’t remember the chronology being as clearly defined. I’ll list the playsets in what I remember to be the best approximation of “chronological order”.

EPISODE 1: VACATION AT CLUB DREAD
The only Series 2 set that is laid completely flat (we’ll see more of this layout in Series 3), and easily the most fun for a kid who loves boat chases, boat crashes, and lots of room for both. The downside is the near absence of detail: not much substance here, although the oodles of stuff included sort of makes up for it. Also, it’s the only time we get a unique Micro Mob soldier: the silvery dude on the jetski. 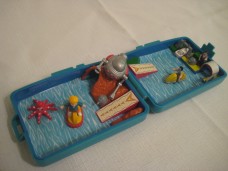 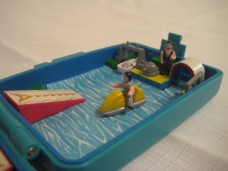 EPISODE 2: ON A HURTIN’ SAFARI
I really like this one. The Treehouses of Evil are rather cute, and perfectly set above the raging rock-speckled river below, a perfect place for many a villain to plunge to his death. The removable bridge is also a nice feature. On the downside, the ladder never attaches properly and the animals look like they were lifted from another playset by another company. Still, a pretty cool set. And you get another hydrofoil! 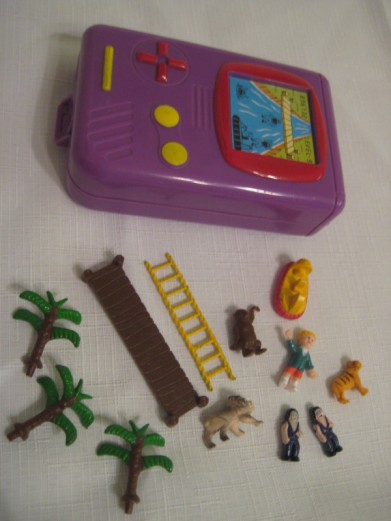 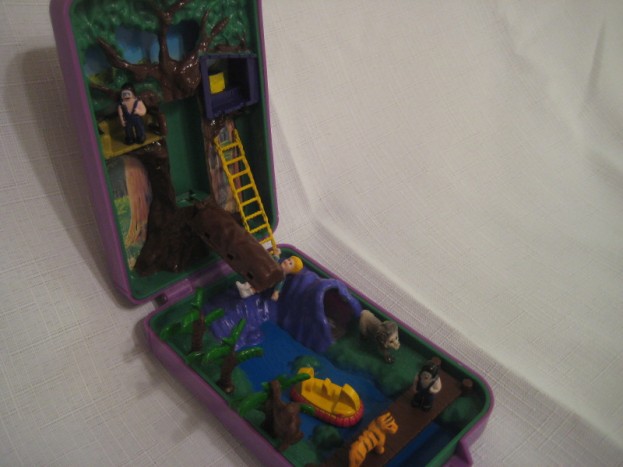 EPISODE 3: IN THE FACE OF PREHISTORIC PERIL
If they had laid this one out flat like Club Dread, it would probably have been the best of Series 2. As it stands, it’s neat, but otherwise bland. The volcano in the background is kind of useless, leaving you with only half a usable environment. I do really dig the moving lava-crag, though, and the armored triceratops gives me Dino-Riders flashbacks.

EPISODE 4: THE STAR TRAP(?)
The climax of Series 2 takes us into space once again, this time to an evil moon base what needs blowin’ up! Sammy’s really in trouble here, as the bad guys come with all sorts of nasty space weapons to jam down his throat, the most devastating being the sleek starfighter that gets its own retractable landing pad. There’s also a ramp for the moon buggy and a swiveling/removable solar antenna and space bulldozer ensemble. The pastel colors harken back to Series 1 a little bit. 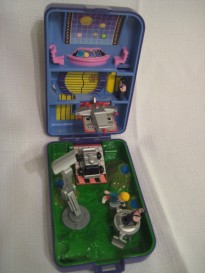 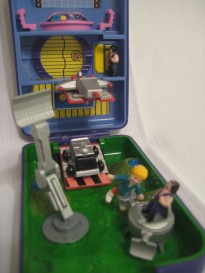 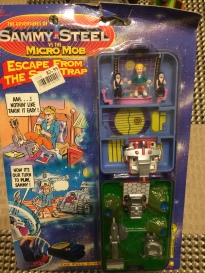 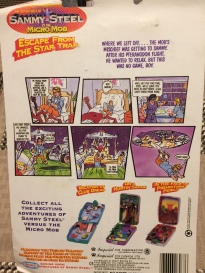 Final thoughts: Series 2 is certainly uglier than Series 1, but it’s a helluva lot more fun. None of the Series 1 playsets let you send a monkey on a speedboat rampage, I’ll tell you that much.