Mighty Max knock-offs are rare, but the most well-known of them is Sammy Steel, or to be precise, “Sammy Steel vs. The Micro Mob”. Pictured above is the entirety of that toy line — three series of playsets, a total of eleven.

Like Mighty Max, Sammy Steel was brought to us over the course of three different series. Also like Mighty Max, Series 1 (the round sets) is the cute one. There the similarities end, however: Sammy Steel was a toy you’d find in discount stores like Big Lots and Dollar Tree. The quality is much cheaper — evident at a mere glance — and whereas Mighty Max sets glowed with creativity where design was concerned (they had to or they couldn’t close!), Sammy Steel shows merely a small spark.

Still, I ate these things up. I always had a thing for weird dollar store toys, and this was a rare gem: a little-known knock-off of my favorite toy line. I’d seen plenty of He-Man and GI Joe knockoffs, but never one of Mighty Max!

It should be noted that Sammy’s playsets also came with a comic detailing his adventures, just like Max. But his comics illustrate a chronological story, which I’ll remain true to by listing the playsets in the “proper” order.

It’s a cute prehistoric wilderness with a spouting volcano that better resembles a geyser of stew or kool-aid. The caveman dude is a hilarious Hanna-Barberra caricature. This is our first look at Sammy, himself, evidently played by the oldest son from “Home Improvement.”

Sammy goes from the jurassic age to the…mammalian age? He faces a palette-swap caveman and a rather neat smilodon. The locale has a workable cave door and features a lush and rather un-menacing environment. After the raging volcano bit, this area seems pretty peaceful. 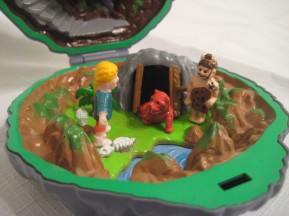 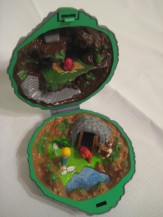 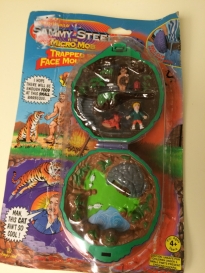 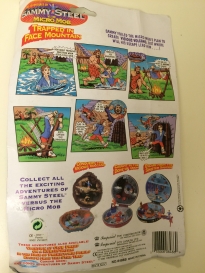 Beneath Face Mountain Sammy encounters…the least interesting set in my opinion. Although it does feature a sweet lizard dude and hover-scooter. At the center is the Boss Brain or whatever he’s called, who’s tasked with the security of the path between earth and the Sinister Saucer hovering overhead. I guess. I’m sorta bullshitting at this point. 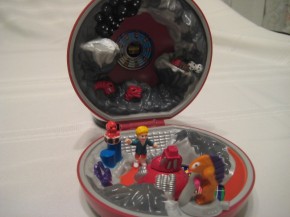 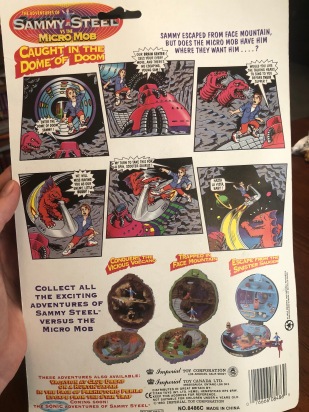 At last Sammy comes face-to-face with the robotic head of the Micro Mob. This is easily the coolest set of Series 1 and my personal favorite: it has more features than the other three combined! Space shuttle and retractable landing strip; Articulated radar dish that swivels and nods; and an airlock door that opens and closes. The two bad guys are also neat looking: the robotic villain is like something out of Star Wars, and the jetpack spaceman is rather sinister-looking. I also dig the lunch room on the top floor.

So that’s the first adventure of Sammy Steel. Not up to the same standard as Mighty Max, I’m afraid (nor Polly Pocket for that matter); still, as a kid I had a lot of fun with these. As far as knock-offs go, you could do a helluva lot worse.