The Best of HP Lovecraft 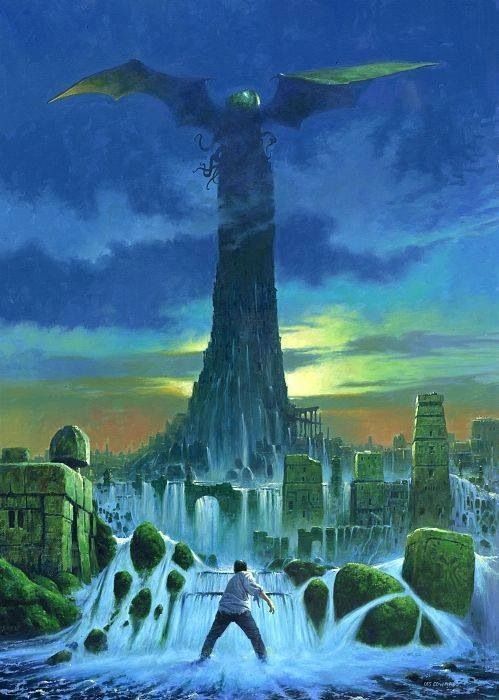 I often end up talking Lovecraft with new writers who haven’t read him, and I make sure to bring up the following points:

Lovecraft wrote a variety of macabre tales: from short traditional spooks to sprawling novels of poetic horror, and some are more effective than others. Here are what I find to be the best of his works: the scariest, most accessible, and least unwieldy for new readers. If you haven’t read Lovecraft before, these stories make for a good introduction, and may convince you to give his longer works a shot.

THE LURKING FEAR. Something of a more traditional haunted house story, but with a cool new spin on the concept. The atmosphere is palpable in this one, and there are a number of climactic scares throughout, rather than a slow burn with no payoff til late into the story, like in The Shunned House (though it’s also a good read). The writing is as dense as you would expect from HP, but it’s worth it once he starts dropping the scares into your lap. Thinking of being in the protagonist’s shoes still gives me chills when I think of what he went through, and there are moments when the mere anticipation of a terrible event makes you squirm. A frightful delight.

THE DUNWICH HORROR. Many of HP’s works involve a lot of buildup for very little payoff, but this one constantly raises the stakes and the weirdness, lacing it all with a thick atmosphere that really makes the degenerate backwater of Dunwich come alive. The reader gets a better sense of involvement than in Call of Cthulhu: both are great horror tales written in an investigative journalism style (forgiving the dense gothic prose HP loved so well), but whereas Cthulhu leaves the reader feeling far removed from the events described, Dunwich somehow manages to feel more like an event in progress, and feels more intense as a result. The actual horror doesn’t kick off until the second half, and manages to predict classic creature features involving giant monsters running amok in human civilization. Many of HP’s “big reveals” are telegraphed pages in advance like always, but the overall experience is a great one and leaves you with a broad collection of unsettling images and ideas. Great spooky fun, and definitely worth reading more than once.

OUT OF THE AEONS. Essentially ghostwritten for Hazel Heald, this is a surprisingly effective tale of the mythos revolving around a strange mummy, an equally strange scroll, and one of the most frightening creatures in all of Yog-Sothothery. HP was fond of folk tales and mythology, and it really shows here: the story of the people of Mu is fascinating and feels like something out of a textbook, and the mystery of the mummy lends itself to a lot of spooky fun. It ends up feeling like the sort of yarn you’d read in a scary story anthology, albeit with a more archaic writing style. It’s underrated and highly recommended, despite the bogusness of the Mu culture irl, and a few questionable science fact elements.

I also want to give a shout-out to Robert W Chambers, who inspired Lovecraft and wrote The King In Yellow, a great anthology and fascinating combination of proto cosmic horror and romanticism; and Robert Bloch, who contributed a lot of great stories to the mythos, collected in the anthology The Mysteries of the Worm.