“Nothing drops a reader into slumberland faster than a seven-layer cake of exposition right at the beginning of a new book.”

A lot of ebay members have difficulty listing Mighty Max items, probably for good reason: each set comes with lots of small parts that can easily be lost by the average seven-year-old.

Still, if you’re going to list anything for sale on ebay, you need to do your research first — too many sellers lump pieces together without knowing what goes with what, and nobody wants to buy an incomplete set, or be forced to buy multiple lots just to get all the right pieces.

This article should serve you as a springboard for being sure of what you have, which parts go with it, and whether the item is complete or not. You can often use my photos for reference, since all of my toys are complete (except the Monster Heads toys, missing a single figure), but I don’t have every Mighty Max toy ever, so you’ll have to do some research yourself.

First, know what items you have. If you have the name of the item, you can do an image search for that item, and almost always find photos of the complete item with all its parts. Mighty Max toys came in the following forms: 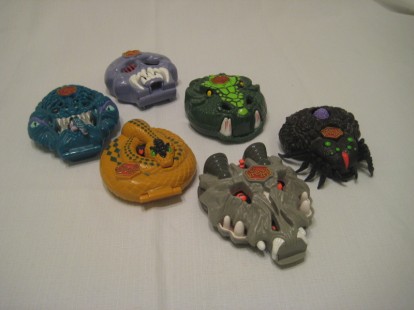 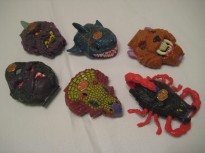 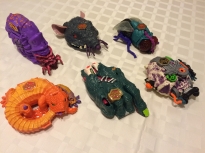 DOOM ZONES – the typical playsets, hand-sized compacts slightly larger in diameter than a drink coaster. They seem to average $10 to $20 depending on condition and availability. There were 3 separate series  of these toys, listed above in order. Each came with a randomly distributed Max figure. 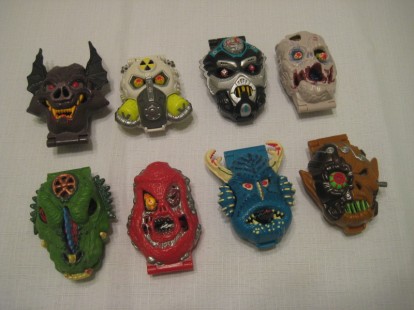 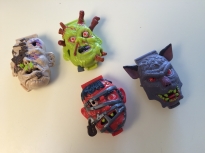 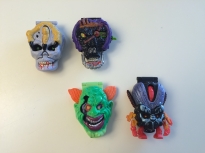 HORROR HEADS – Smaller playsets that fit in your palm, which usually only came with a couple of figures. Typically range from $8 to $15 if complete and not badly beaten up. There was also a trilogy of these toys, but Series 2 and 3 consisted of four playsets apiece, while Series 1 consisted of eight. Each came with a randomly distributed Max figure. 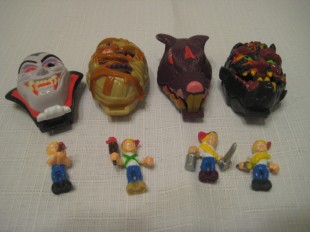 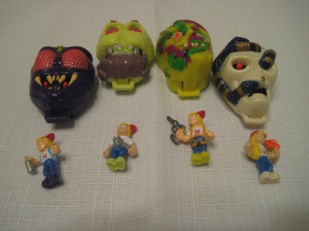 SHRUNKEN HEADS – These were the size of a brooch, and came with one removable piece: an exclusive Max figure. Shrunken Heads came carded in pairs. There were two series, but I don’t have any photos of the second series. They’re nicely sculpted and painted, so you can probably get away with selling one for as much as $8. Series 2 Shrunken Heads go for as much as $50 a pop, but I advise against pricing them that high, especially since they’re ugly and badly designed. 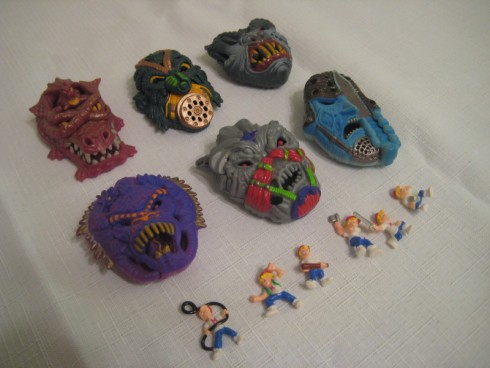 MONSTER HEADS – Cheapo toys that weren’t even playset compacts. It’s hard to tell if the Max figures were randomly distributed or unique to each set; most photos will show the same Max with each set, so best stick with it. The Max figure on the far left is from the Heroes & Villains series — I lost the figure that came with the gold dragon head. 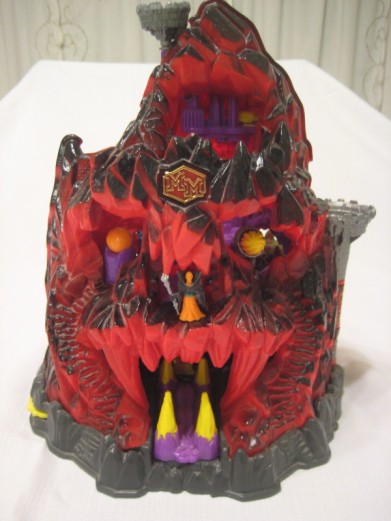 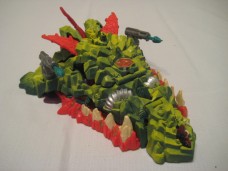 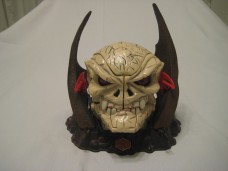 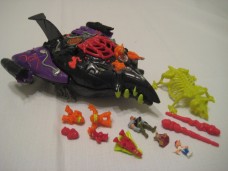 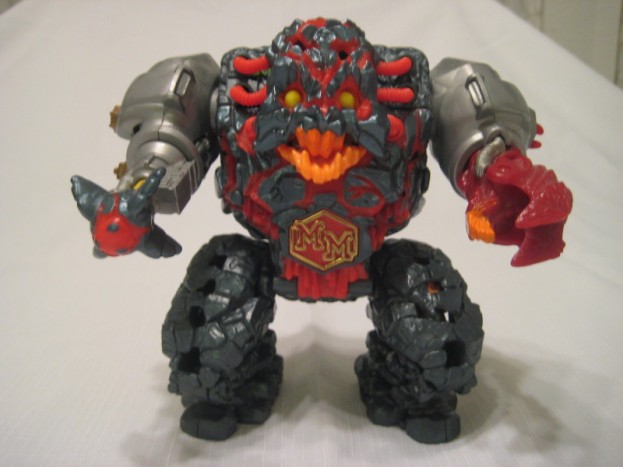 GIANT PLAYSETS – These usually aren’t categoried in Mighty Max Playset Terminology, so I lump them together. Search for Skull Mountain, Dragon Island, Skullmaster Mega Head, Terror Talons / Dread Star, and Magus when researching Mighty Max toys to see examples of complete sets. Terror Talons was released in the UK as Dread Star, and came with an additional figure and vehicle — make sure you know which version you have before listing it. 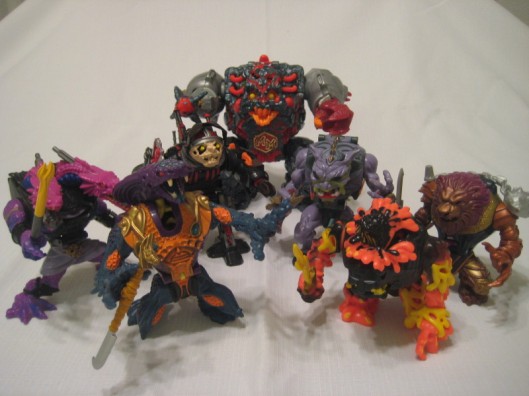 BATTLE WARRIORS – Also known as Action Masters, these were action figures that opened into questionable playsets and came with oodles of loot. Pictured above with Magus to show the scale difference.

HEROES & VILLAINS – Bluebird released six 7-figure packs under this title. Half of them were repaints of previous Doom Zone and Horror Head figures, while the ones pictured above are from the sets based on the cartoon. 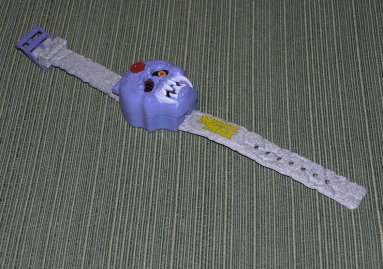 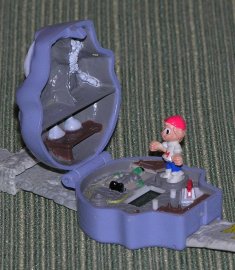 WRISTWATCHES – These photos are courtesy of the Toy Museum. Five of these adorable watches were produced, to my knowledge: based on Doom Dragon, Ice Alien, Wolfship 7, and Skull Dungeon (above) of Series 1, and a fifth based on Geela Guts of Series 3. Each came with a Max figure, which could stand in the diorama. 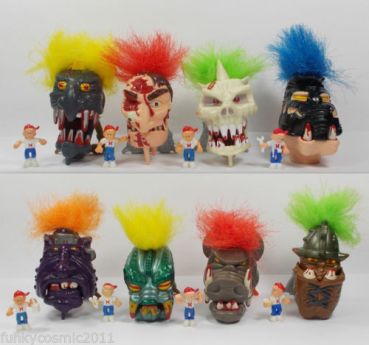 DREAD HEADS – Photo courtesy of Funkycosmic at ebay, a regular Mighty Max seller. These severed heads had troll hair and hinged jaws for gobbling the Max figure each came with. They must’ve made these in response to kids losing their Maxes all the time. 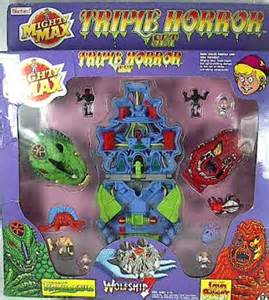 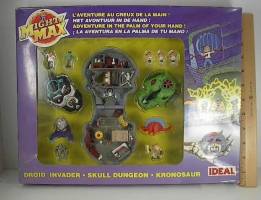 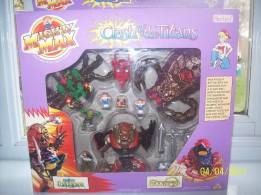 MULTI-PACKS – These count among the rarest of Mighty Max items, and new ones keep popping up. Photos are impossible to come by (thanks, Bram Brouwers!), but the better-known ones were titled “Triple Horror” and “Clash of the Titans” (the multilingual one pictured above is a recent discovery by Ideal). Clash is a two-pack including variants of Battle Conqueror and Scorpion. Triple Horror includes a Wolfship 7 variant and the Lava Beast and Kronosaur horror heads, but there’s another version that includes The Hand instead of Wolfship. These boxed sets are elusive to the point of legend, but you can find the variants on ebay by themselves with little trouble. There’s also the rare French carded two-pack.

WHICH MAX IS WHICH?

I wrote an article on the subject of identifying Max figures, to make sure you list your playsets with the correct one before calling it complete. It should be required reading for anyone selling Mighty Max toys: Max collectors will generally know if you’ve listed a Series 1 Max with a Series 3 playset. It may not affect whether they buy the item or not, but the more accurate your package, the more enticing it is, and the happier your buyer will be (because now they don’t have to find the right figure separately).

Do your research before you list. And make sure your prices (and shipping especially) are reasonable. It could be the difference between selling the item and relisting it over and over ’til doomsday.