RPG Recap 5: Fit for a Hero

In a previous Pathfinder entry I mentioned our collection of magic rings, one of which was the Golden Ring of Spontaneous Combustion. It was an absolute last resort item.

Cultists were about to sacrifice our king in Pathfinder, and they holed up in the castle prison: they were locked in a cell and performing the rites to do whatever terrible thing they were about to do to our helpless liege. We had moments to spare before they finished, and nobody could pick the lock to reach them in the back of this huge cell.

Totok the Barbarian — bearer of the explosive ring — looked at us all and said, “Everybody out.”

We all knew exactly what was about to happen, and we immediately jammed up the door like the three stooges. A heartbeat later there was a resounding BOOM that shook the castle in its foundation. When the ringing in our ears stopped, we went back inside.

It apparently did exactly what it described, this ring: the wearer would explode and kill everything around him, lose all his gear, and have to make a save not to die himself.

The air in the prison was all smoke and debris, and the cell was gone: in its place was a pile of rubble, a crater, and a scattering of ash what used to be Totok and the cultists. The castle guards rushed to the king’s aid, who had miraculously passed the save being just outside the kill zone.

When asked if he was all right, the king coughed twice, smiled through his concussion, and rasped, “That was pretty cool.”

He then put up the money to have Totok resurrected, but it’s up to the spirit whether or not they return when called. Despite being reunited with his dead wife, he felt his duty wasn’t yet finished, and returned to the land of the living…wearing fuck-all for clothes. He is rewarded by the king during a ceremony while holding a helmet over his privates.

Well, by this point in the campaign Bonny Braids (my irresponsible cleric) had begun her path to righteousness, and was very slowly but surely becoming the decent person that she was destined to be. She admired Totok so much for his sacrifice — both dying to save his king, then giving up the reunion with his dead family — she insisted on taking him out on the town to have a few drinks and buy some new clothes.

Three tankards later, this went COMPLETELY out of hand and turned into a trip to Las Vegas: they proceeded to hit every single shop in the impressively sized market district, going down the line of shops and buying something at every one. If it happened to be another tavern, so be it: more drinks, and more gambling for Bonny (resolved with a simple die roll). I had a chart of their path through the market district in relation to their drunkeness, but I lost it, so I will summarize the afternoon with a helpful line graph: 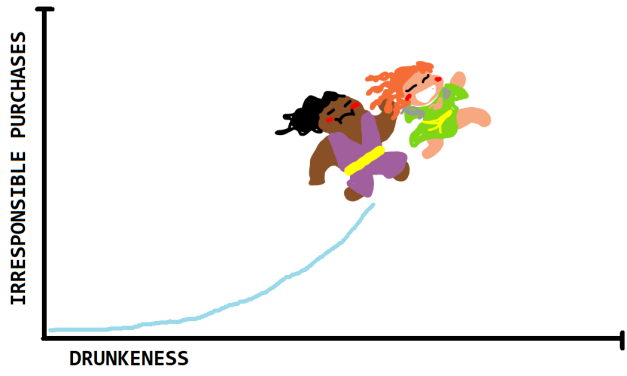 Here is the list of items purchased in the course of one bout of bar hopping:

Totok’s New Gear
Greataxe
Scale Mail
Backpack
Bedroll
Chalk x10 (for warding each shop against evil spirits, aka drawing dicks on everything)
Flint & Steel
50 ft Silk Rope
Sack x3 (you can never find a sack when you need one)
Whetstone
1 lbs Soap (‘cos hes a barbarian)
Torches x5
Waterskin
Fine Dude Clothes (he needs to look sharp, he works for the King now!)
Traveler’s Outfit
Pipe and Tobacco (to match the dude clothes)

Bonny’s New Gear
Glaive (which she can’t use, but she’ll train someday and it’ll be awesome)
Ocarina (she doesn’t know how to play, but she’ll learn one day)
Pouch of Raspberries (aka medieval lipstick)

New Additions to the Party HQ
Carriage
Ox (for carriage…?)
Billy the Pygmy Goat (“He can be our mascot! Assuming Fara’s tiger Zieg doesn’t eat him…)
2 Bags of Grain (came with the goat)

The goat mysteriously vanished and was probably eaten by the tiger after all. The carriage lasted a single in-game day, used to ride to the next country for the next sub-quest. Bonny never used the glaive or the ocarina.

Totok never wore the fine clothes or used the pipe. He sure used the shit out of that chalk, though, warding the city against evil spirits…and making headlines as a nameless mystery vandal the city guard never apprehended.