I love Ray Harryhausen movies. They’ve always been a favorite since childhood, and the Sinbad films are no exception. Each one is good in its own right and brings something fun tot he table, but no Sinbad portrayal was better than John Phillip Law. And no Sinbad Girl was hotter than Carilone Monroe as Margiana in the Golden Voyage of Sinbad.

JPL brought a likeable humanity to the character that was lacking in the other films, and he looked the part more than anyone else. It’s impossible not to like this incarnation of Sinbad whenever he’s onscreen. And every time I see Munroe in those Arabian outfits I swoon a little. 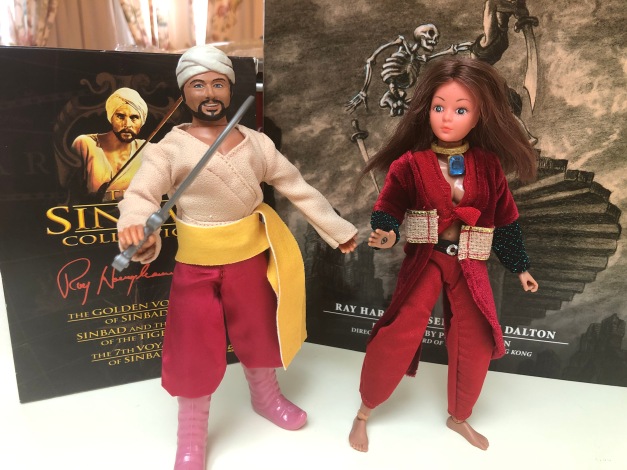 So I decided to pay tribute to them both in Mego form! Sinbad’s head is a repainted (thanks Metalhead Minis!) Gideon from the Bible Greats line, and really resembles JPL well. The costume is cobbled together from a variety of sources to match his costume in the latter half of the film, and an Aladdin sword from Mattel rounds him out nicely.

Margiana is a real prize, with a Zica Yvonne body and a vintage Demo Girl head that sort of resembles the actress herself. I added the eye tattoo on her hand myself, and the badass costume was made by O. T. Puente based on movie stills. They look amazing together, and all that’s missing is a monster for them to fight.