Return of the Sky Band

In my quest to find a good car for the Shadow, I ended up finding a way to make the only interesting Phantom adversary that wasn’t a cookie-cutter yellow peril bad guy: the Baroness, leader of the Sky Band, a group of lady pilots who are also lady pirates!

Since there isn’t much for pictures of her online, I went with her only appearance in the Defenders of the Earth cartoon. I cobbled her portrait together from three different screenshots, and also borrowed that version’s the Sky Band emblem for the decals.

The plane is a Tri-Wing Terror from the Talespin toy line, which is a dead ringer for the style Mego used for their vehicles back in the day. All it needed was open space under the dashboard so the doll’s legs could fit (i did this myself with a dremmel). 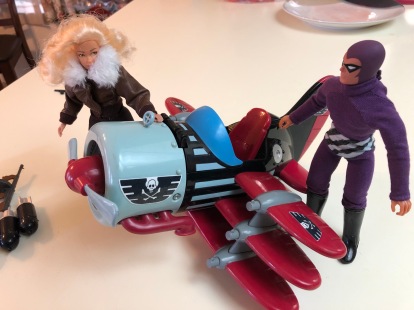 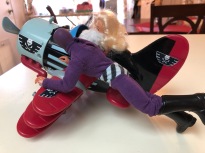 She’s an awesome and stylish addition to the collection, though I had to replace her crappy FTC jacket before it completely disintegrated completely. Now she’s sporting a sexy low-cut pulp bombshell look. 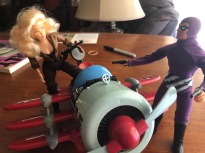