I recently discovered the company Hinstar produced a ton of weird little knockoff toy lines in the 80s or 90s, mostly in the form of 6-inch vinyl soldier toys. Apparently they also dabbled briefly in the mini-playset scene with Small World – Pocket Paradise.

No idea why this series of toys was given the Small World header, unless there were other mini-playsets by Hinstar (EDIT: there indeed were, such as Power Striker Rangers). What’s interesting is that they’re sort of a Polly Pocket / Mighty Max style toy, but with a bootleg Sanrio flavor: all the figures are cartoon animals, which I initially mistook for carnival prizes since all these toys are carnival themed.

They are indeed endearing in their shoddiness. I was sure this one came with a frog, but I was mistaken. The hippo is pretty darn cute though.

I got this one because it had a ton of figures and I liked the design of the collapsing ferris wheel. There is also a train set, an eatery/octopus merry-go-round, and another one I have yet to identify.

There are also two or three mini-playsets with wrist straps, one of which I managed to get carded. The card was partly popped off from age (see yellowed plastic in bubble) and held on with staples, so I removed the staples in order to take it out whenever I want. Despite having nearly a dozen of these little Sanrio knockoff characters now, I still don’t have Bizarro Keroppi! 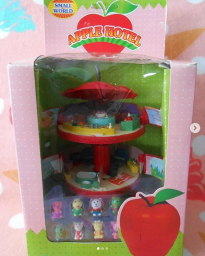 There’s also this impressive Apple Hotel jumbo playset I’d love to get my hands on.