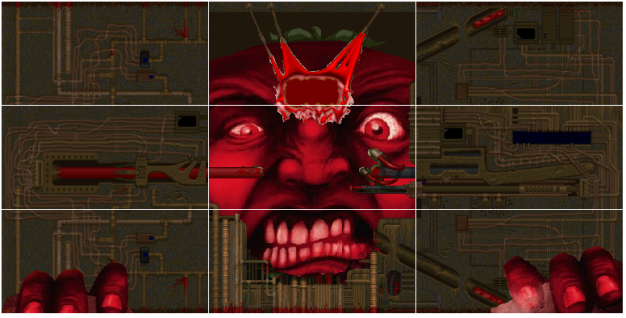 Replaces the guns and monsters of Doom and Doom 2 with ridiculous crap from the Killer Tomatoes franchise. Play at your own peril.

Downgrade your weapons! Summon sexy tomato women to do your bidding! Battle annoying paparazzi, deadly ninja, and other non-sequitors! Tolerate blatant product placement! Save the world from the real red menace — killer tomatoes!

Get it here if you’re bored enough to play this drivel.

It’s not finished, and may never be. Who knows.

It’s meant to resemble a terrible 90s shooter, so most of the guns are renders of questionable quality from Duum 2 Super, Shambles, and Liquidator.

two games were made before, though
for spectrum and nintendo
bad game design and graphics too
brought nothing but sub par reviews
and now it sucks
on pc too!

this mod has no new levels
no imps or cyber-devils
just play it when you’re getting bored
with fighting off demonic hordes
and help it to win
a cacoward!

8 comments on “Killer Tomatoes for Doom”