Here the bulk of Max’s adventures draws to a close as we finally round out the Doom Zone collection. 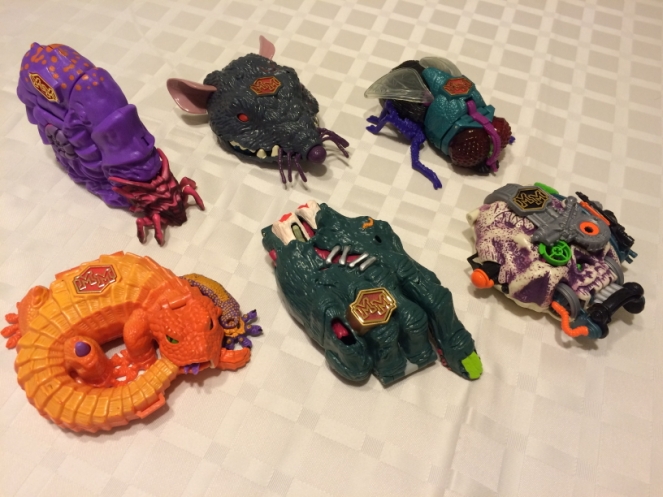 On the plus side, the designers went all-out with the playset layouts: almost every one of them is a complex puzzle box of moving parts and odd configurations, from the vertically splitting Nautilus to the bagel-shaped Geela Guts. There are a few golden moments here, but despite the unchained creativity in the playset compositions, it was at this point I realized Max wouldn’t see a fourth adventure. Where the designs are cool, the substance is…lacking.

CYBERSKULL is too abstract for my tastes: it plunges Max into the belly of his own computer (just like the elusive Geela Guts doom zone, which plunges him into the belly of his pet iguana), so the interior is an amalgamation of computer parts and electronic miscellany. I only got it because, at the time, I was a completist. It’s also the only doom zone with a black Mighty Max logo, instead of the usual red. I’m not sure why this is.

There’s another Mighty Max blogger who seems to love this one. Different strokes I guess.

Leagues cooler than the random computer mishmash of Cyberskull is THE HAND, by far the most macabre of all Mighty Max playsets. Bury the hero in a graveyard? Zombies tangled in their own intestines? A set designed like a rotting, severed hand? They went all-out with this one. Once again Bluebird’s love of dancing villains rears its funky head, in the form of the prancing tree monster and the “hip hop hooray” zombie.

RATTUS suffers from bad set design: the main feature is a huge cage with a double-trapdoor setup. The floor, meanwhile, is completely bare when unpacked. By far the worst offense is those damn ears: they’re murder to remove from the set, and absolute hell to get back on for storage, which doesn’t bode well for a kid’s toy. It does have its finer points though: the villain is really snazzy-looking, and his pet spider is scary as hell. It’d actually be a pretty swell playset if there was more to the main floor than a decal and a bit o’ detail. 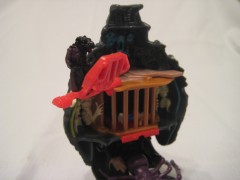 THE FLY is my favorite from Series 3: it takes place on a flying fortress piloted by a mad-scientist-turned-Brundlefly and comes with a giant bug-legged vehicle that could duke it out with the scorpion tank from Series 2. The cockpit windshield opens up to reveal the pilot inside, even when the set is closed up. It’s the smallest Doom Zone in the toy line, but the stuff it comes with makes it worth it, and what little space there is definitely has its share of awesome detail. 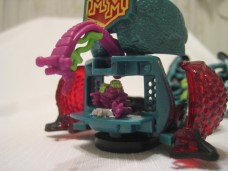 Then we come to NAUTILUS. Yes, it’s that Nautilus — the villain is none other than Undead Captain Nemo. This Doom Zone is unique from all the others in that it opens vertically in half rather than horizontally; whether or not it’s your favorite Doom Zone, it stands out from all the others in a positive way, enough to make up for yet another gaudy color scheme. 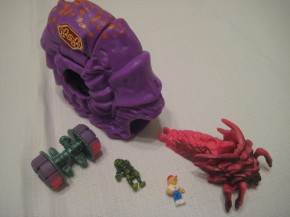 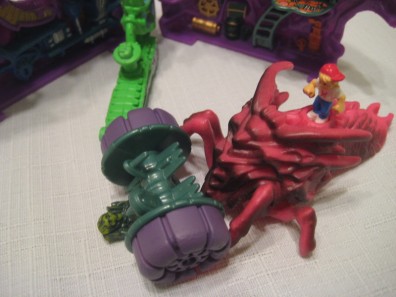 GEELA GUTS (aka LIZARD) was not released in my region of the US, so I wasn’t able to acquire it until recently, and even then it came with the wrong Max figure, which I’ll have to replace at some point. But the set itself is by far one of the most creative and unusual as far as outward design goes. The articulated tongue can swallow Max if the jaws are open, and the overall shape is donut-like with a large empty space in the center that penetrates the entire set. The interior is delightfully gruesome, a new high for Mighty Max Macabre: Max runs around the innards of his pet lizard, which is apparently INFESTED with hideous alien parasites. The Parasite Prince villain is extremely cool and has a nicely detailed mug. 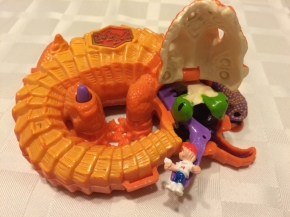 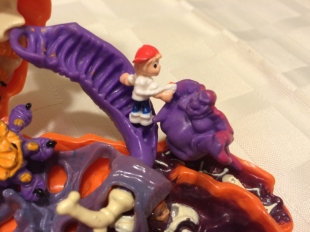 These ‘Heads shows the first major signs of the death of the Mighty Max line: the interiors are lazy and uninspired like most of the Series 1 ‘Heads, but the figures are kind of cool at least. There are two gimmicks this time around: they seem to jaw-themed, with most of the compacts’ jaws doubling as vehicles or monsters when open; and none of them come with the featured villain! It’s too bad, ‘cos this is the batch that featured Freako, the clown with radiation poisoning. That woulda made for an awesome Doom Zone.

RHESUS 4, the most common of the Series 3 ‘heads, is lackluster at best. It has a vaguely Planet of the Apes motif that could have been exploited better, and half the accessories are for a goofy looking combine. This set is also known as HYDRON for some reason. 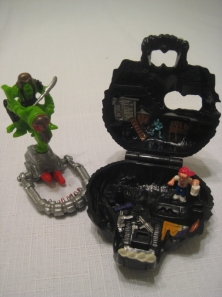 TALON came with some cool monsters, and a badass jaw-tank. The giant vulture has an assortment of perches all over the playset, including one at the very top of the opened compact. This set is also known as CLAWBER.

FREAKO THE CLOWN has a great compact face: a bright-green grinning clown monster. The set itself is a psychadelic circus which seems largely uninspired: they could’ve at least included a hellish trapeze or something. The monsters are pretty cool at least: a two-headed freak and a giant shark-wolf(?). It also has the most striking face of all the horror heads — as an added stroke of design brilliance, the two-headed freak’s fingers and wristband become further eye tendons for Freako when the set is closed. 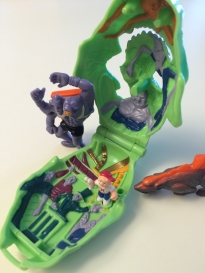 BEETLEBROW is the rarest of all the Mighty Max playsets. The insectoid robot likes to ride around on a space-jetski, and has an abode filled with creepy crawlers and some poor, unlucky spaceman being eaten alive by worms. Max can’t ride the jetski, but he can giddyap the generic tentacle beast.

The Beetlebrow and Freako horror heads, like the Geela Guts doom zone of Series 3, were readily available all over the UK, but only select areas in the US for whatever reason. Some states didn’t get anything from Series 3 apparently. I have no idea what the deal is with Series 3’s wishy-washy US distribution, but it’s a shame it kept me from getting the entire playset collection for twenty years. That has finally been remedied, so the collector in me can finally sleep well at night.

This set’s connection to the cartoon is obvious from the get-go: it’s made in the striking image of Max’s nemesis, the titular Skull Master. Many a kid probably enjoyed busting this evil bastard’s face open. It sports a lot of silly, cartoonish decals — one more sign of Bluebird’s growing disinterest in the toy line — but there’s tons of great stuff to make up for it. We also get the return of the Skull Master figure from the Double-Demon figure set — he can wield his menacing staff when it isn’t being fired from his big blue howitzer. 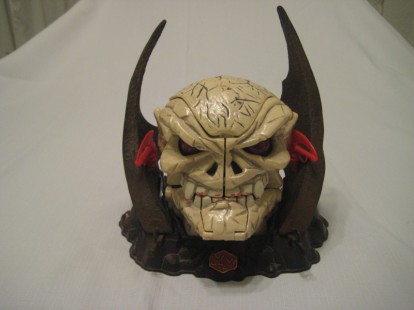 You can put Norman on a torture rack controlled by a giant head-cleaving axe on the rear balcony. Figures can easily plummet to their doom through the eye socket windows, above which hideous green ghouls are crawling down from the rafters. There’s a bodacious babe held captive on the ground floor, but she’s part of the background and not a removable figure, which is a shame. 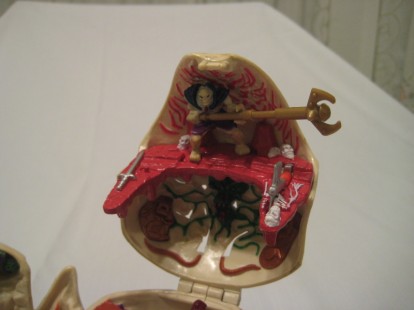 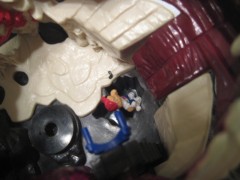 That last pic shows the Pit of Despair: anything you drop while playing with or packing up this playset will land in there 10 out of 10 times.

This set seems a little small compared to the other Super Doom Zones. That’s because we haven’t yet assembled the Skull Master’s ultimate weapon: a giant, over-armed, bat-shaped glider, which comprises about one-third of the playset. Its thrusters — also the playset’s “eyes” — are battery-powered and glow while in flight.

This concludes my primary Mighty Max articles, and Max’s main adventures. Hope you enjoyed readin’ them and looking at my silly photos. Now I can put these playsets back in my closet and stop breathing and eating dust, like I have been for the past week.

Up Next: Action Figure Sets