This was, and still is, my all-time favorite toy line. Mighty Max was the brother of Polly Pocket, although I guess you could say he wasn’t as successful, given how Polly is still around today, eating at fifties diners and going to salons. Max dropped out early, but it’s easy to see why: there’s only so much horror a young adventurer can take, as we’re about to witness over the next few blog posts.

Mighty Max was a great toy for a kid who loved miniatures as much as he loved horror and adventure. It was also a great toy for any kid who just wanted to do terrible things to poor Max, as if his curse were to travel endlessly between dimensions only to be tortured and killed in various horrible ways.

I always had him win, though. Honest. 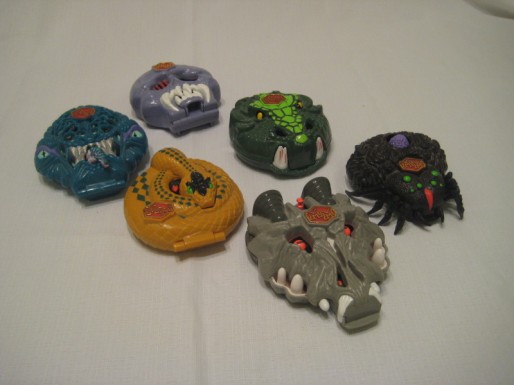 Mighty Max never looked this adorable again: lots of pastel colors and characters that were spooky in a cartoony, almost Scooby-Doo-esque way.

WOLFSHIP 7 depicts the bridge of a nifty alien battle cruiser. The blue Geiger-esque aliens love orange highlights. The coolest feature is the little removable fighter ship at the front of the deck, which anybody can pilot. 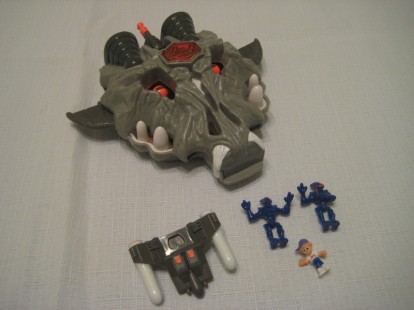 ARACHNOID was a cool mad science lab like something out of a 1950’s creature feature. The villain is memorable for being the scariest villain of the Series 1 Doom Zones: a ghastly humanoid spider. His pet, the giant tarantula, is — comparatively speaking — cute as a button. 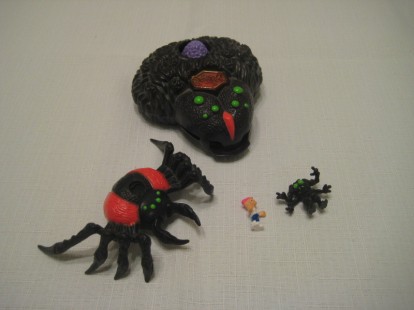 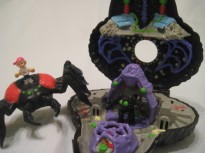 THE DOOM DRAGON was my first set, and essentially where I fell in love with this new toy. The rocky cave formations inside are super-detailed and sport a big ol’ acidy lake for evildoers (or Max’s dumb ass) to fall into. I liked that the dragon got its own little cave to sleep in. 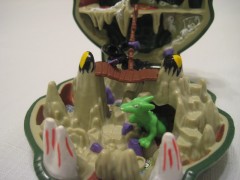 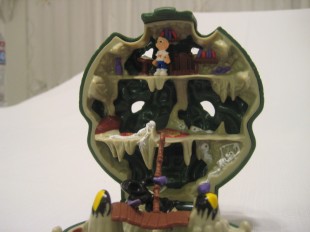 THE PALACE OF POISON is easily one of the top two sets of Series 1. Never mind the awesome exterior — inside is an elaborate Egyptian tomb, laid out in a slightly different way than the other sets (the snake’s head becomes a tower o’ treasure). We had this set for about a year before discovering that the chest on the main floor could open up. You know you have a badass toy when you’re constantly discovering new things about it. 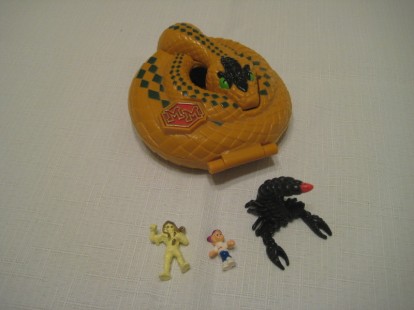 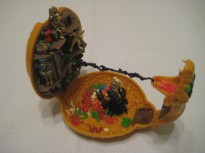 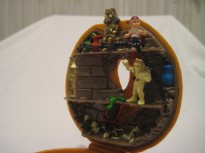 SKULL DUNGEON is my favorite Series 1 set. It’s exploding with neat details and all kinds of moving parts, and what’s not to like about the Universal monster movie decor? The highlight of course is the articulated “Frankenstein” table where Dr. Gore’s pet lies, waiting for new life! 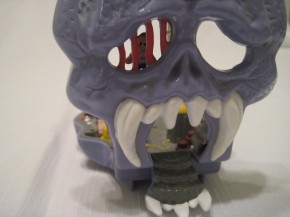 ICE ALIEN is possibly the least interesting, but has a very nice minimalist color scheme and some neato monsters if nothing else.

Paired with every Doom Zone lineup was a series of half-sized playsets. The compacts themselves were little more than decorative cases for the wicked little figures inside, the interiors comprised of haphazard detail. I quite like the horror heads because in most cases they can be used as “expansions” for the original sets.

The unusual thing about Series 1 is there are TWICE as many Horror Heads as in Series 2 and 3. I gather sales weren’t as impressive.

VAMP-BITER boasts the most coherent interior of the set: a spooky castle with a bloody, cavernous basement. Nothing says “kid’s toy” like a giant lake of blood… 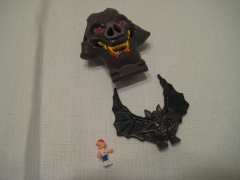 …or a massive, putrid alien brain, like in ZOMBOID. The monsters in this one are some of the coolest; the interior and exterior, definitely the grossest. 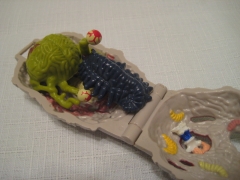 NUKE RANGER. Max probably shouldn’t be hiding amongst glowing green skeletons without a hazmat suit. It’s one of the few Series 1 ‘heads that featured a big vehicle. 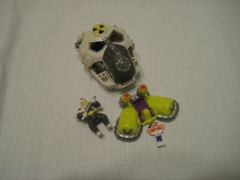 SKULL WARRIOR. I suppose this interior is some kind of cyborg arena, littered with the corpses of fallen gladiators, and Max is forced to fight the cyber-champ on his flying suppository. 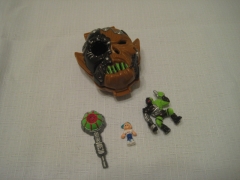 SEA SQUIRM. Lots of cool little undersea details in this one, though I could do without the “reef” in the center. The sea serpent is pretty wicked-looking and gives me flashbacks of The Deep starring Nick Nolte. 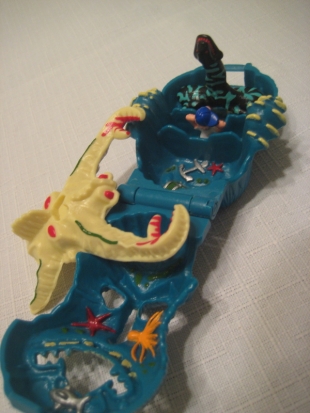 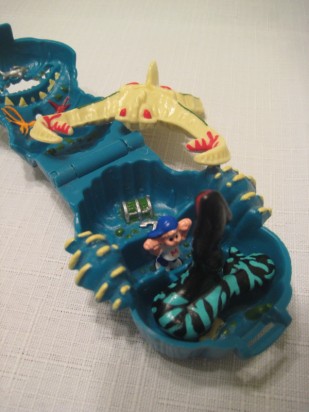 LAVA BEAST. I love how the bad guy is tailor made to choke the life out of poor Max. Bonus points for the super cuddly beetle guy. The interior is kind of dull, being nothing but lava, but it makes a decent supplement to Skull Mountain. 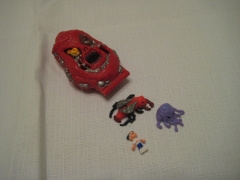 KRONOSAUR. Somewhere in another realm, Ray Harryhausen is smiling. This one has my favorite exterior of the Series 1 ‘heads, for its vibrant colors and exquisite detail. The brutish caveman also rocks socks.

Finally, each series included one or more giant playsets, sometimes referred to as Super Doom Zones. I considered them to be the big finale for each series. Series 1 concluded with the ultimate Mighty Max toy… 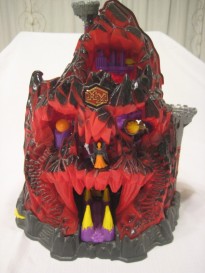 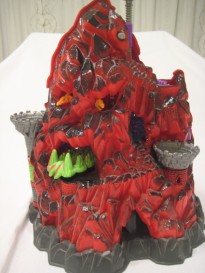 This is the big bloody red jewel in Mighty Max’s crown: the toy line just doesn’t get better than this, even though it was made during the cartoonish Series 1. Skull Mountain puts all other playsets to shame, regardless of the toy line: it has so many mind-blowing features for a kid it’s hard to know where to start. I got this set for Christmas one year, and it was probably the coolest toy my parents ever gave me. 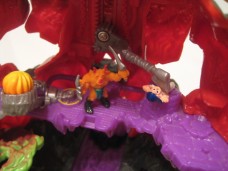 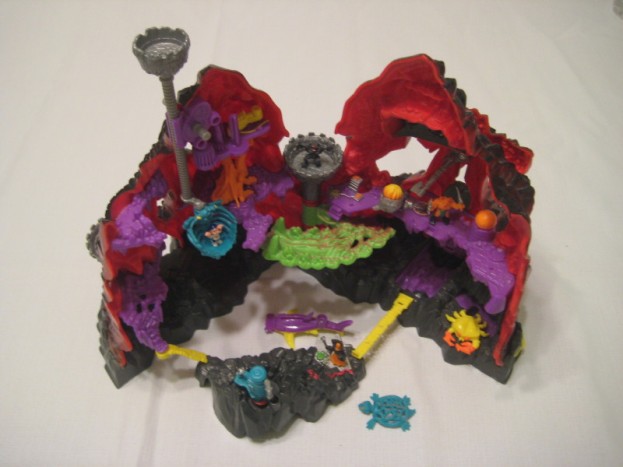 The outside is as much a part of the playset as inside, and just as detailed: I find something new every time I look at this thing. The mountain has multiple entrances, including a hidden elevator dock! If you don’t trust the elevator, you can always take the trapdoor to the right. The elevator stops at five different points, some not so desirable: the dragon’s perch, for instance. A small island extends the playset further, where a hammerhead submarine can be docked. Two moving jawbridges, a trapdoor leading to a pit, an escape pod, two projectile traps, a crab that lunges out of its cave to attack unwary visitors. The launchers also double as torture devices. Take that, Geneva Convention! 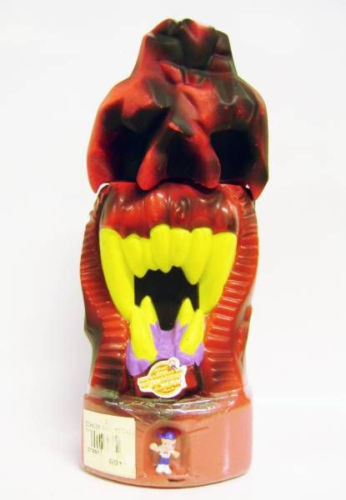 Apparently they made bubble bath, too.