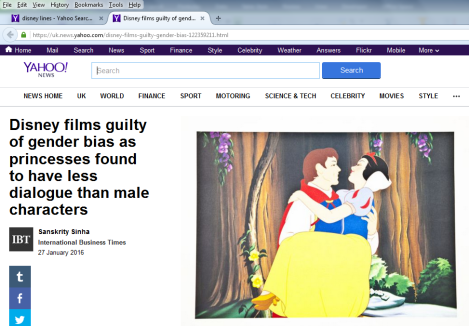 I’m sorry that nobody has told you yet, Yahoo News, so I guess I’ll have to tell you.

This is not. fucking. news.

This is one of many factoids you might bring up in a broad discussion about gender issues in Disney films, and even then it only has relevance if you’re also discussing the content of those lines: fewer lines doesn’t mean less meaningful or important. In that capacity, it’s perfectly acceptable, if a bit neurotic that someone sat down and tallied every single line to prove a point that was probably already obvious (you’re telling me the movie about the girl who only wants to cook and clean her whole life is sexist? the hell you say!).

As a newsworthy story, it’s only acceptable to the mouth-foaming psycho manatees who have made up your demographic ever since you bought Tumblr. When you elevate this one little factoid to “headline” status, you’re making mountains out of molehills for the sake of stirring people up. The fact that people are stupid and immature enough for it to work every time is irrelevant.

Let’s face it, Yahoo: you only report the actual news when it involves a mass killing, and even when you do that, you can’t wait — can’t fucking wait — for everyone else to get over it so you can go back to what you really care about: celebrity gossip, stale political updates, and anything to boil a soccer mom’s blood. The rest of the time, you’re sifting through the Tumblr battlefield, looking for the hottest topics your child-minded lunatic followers are gibbering about this week, so you can then post it as a news headline, even though everyone else on the internet has already known about it for the past two weeks.

Nobody takes you seriously, Yahoo. Nobody but the demographic you were clearly named after. You’re like a sixty-year-old trying to act young and hip, only more embarrassing and pathetic. Just stop it already.