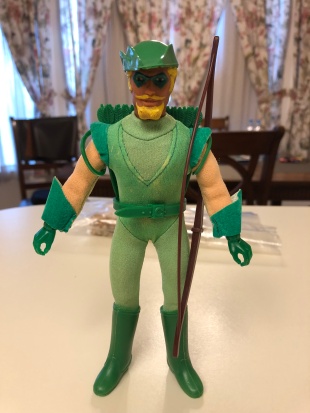 Two new acquisitions have brought a lot more green to the collection. I never drew any attention to ol’ Oliver Queen when he came in the mailbox, mainly because it took awhile for his repro box to catch up with him.

Green Arrow is known for being the best head sculpt in the World’s Greatest Super Heroes line, and one of the best designed dolls overall. It’s hard to disagree with that stately beard and ‘stache, although it’s hard to fit him in the box with his hat on unless I turn his head sideways. The box itself is strikingly minimalist in colorscheme, almost entirely green inside and out, with only some yellow lettering for contrast. 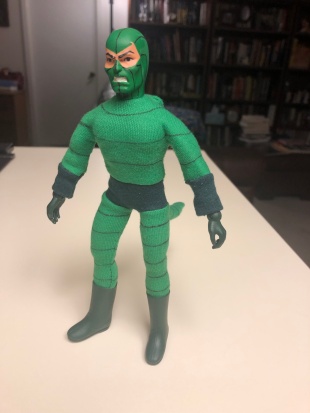 On the Marvel end of the spectrum is this awesome custom Mego of Scorpion, who brings the Spider-Man villain count to three (four if you count Punisher, technically). His suit is hand-made, and the resin head modeled from a bald Conan and painted exquisitely. My only complaint is the “base” of his tail, which makes fitting him in his box a tight squeeze.

The box is awesome to behold, too, another ace creation by Dengar on ebay, continuing the green-and-purple theme of the Spider-Man rogues gallery. He rounds out the group nicely in or out of his packaging.