So you’re writing something related to the Greek myths, and Hades is the bad guy for the hundredth time?

Seriously, how many times has Hades been arbitrarily made the bad guy in a Greek themed project? Disney’s Hercules. Herc’s Adventures. The terrible Clash of the Titans remake. And why, cos he’s the king of the underworld?

Hades being the god of the underworld didn’t make him the devil even in mythology. He was the goth kid of the Olympians: he was sullen, and broody, and brought everyone down. He couldn’t be bargained with or bribed, ideal for someone who keeps the spirits of the dead. The worst thing he did was kidnap his crush and force her to be his wife, which is admittedly pretty shitty. But let’s compare him to some of the other gods, shall we?

Zeus – Tyrannical, vengeful serial rapist. Too many instances to name.

Hera – Tortured and tormented her husband’s lovers/victims and children. Oh, and she dropped her infant son Hephaestus down the proverbial well for being born ugly, after birthing him to spite Zeus in the first place.

Artemis – Murderous misandrist who had little boys sacrificed to her at her temples and killed you if you even accidentally saw her nude. Also made it very clear she wanted nothing to do with dudes, then killed a male friend for not being attracted to her. Way to send mixed signals, girl.

Aphrodite – You know that female coworker who screws her way to the top, brags about cheating on her bf to get back at him for minor offenses, and acts friendly to your face while plotting behind your back? Give her godly powers and you have this superbitch.

Athena – Turned Medusa into a monster for having the audacity to get raped in one of her temples. Oh yeah, and she helped get the Trojan War underway over not winning a godly beauty contest.

Cronus – Ate his own children to keep them from turning against him later, to prevent them from castrating and usurping him. You know, like he did to his own dad.

Uranus – Wouldn’t let his pregnant wife give birth to Cronus because he was worried the boy would overthrow him. Just crammed that kid back into the womb like his wife was a suitcase.

Ares – There’s a reason he’s the unloved god of senseless violence. He’s an asshole. Which is probably why Aphrodite had tons of kids with him.

Meanwhile during all this, Hades is pretty much keeping to himself downstairs, occasionally dealing with mischievous mortals who keep trying to fuck with him.

In short, if you’re looking for a Greek god as your villain, ANYBODY makes a better choice than Hades. Do a little research and try being different, or use someone who doesn’t get used that much! I used Artemis in The Amityville Nuisance, myself, and she ended up stealing the show a little bit. 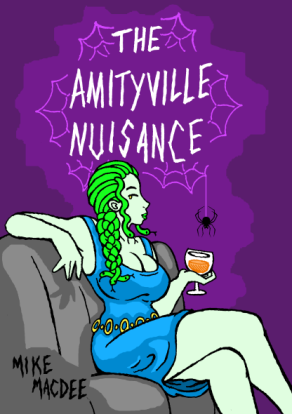