Then A Skeleton Popped Out

I started taking photo-inventory of my remaining toy collection in case I decide to return to ebay as a seller, and thought it might be fun to show off the neat stuff I’m digging out of my closet. I was an avid toy collector for most of my life, most of which was given to charity due to my lack of shelf space and hatred of dusting shit. This cluster o’ junk is barely a fraction of what I used to own, but what little I have left is still pretty cool, I think. Although some of it I don’t remember buying at all, so god knows where it came from. 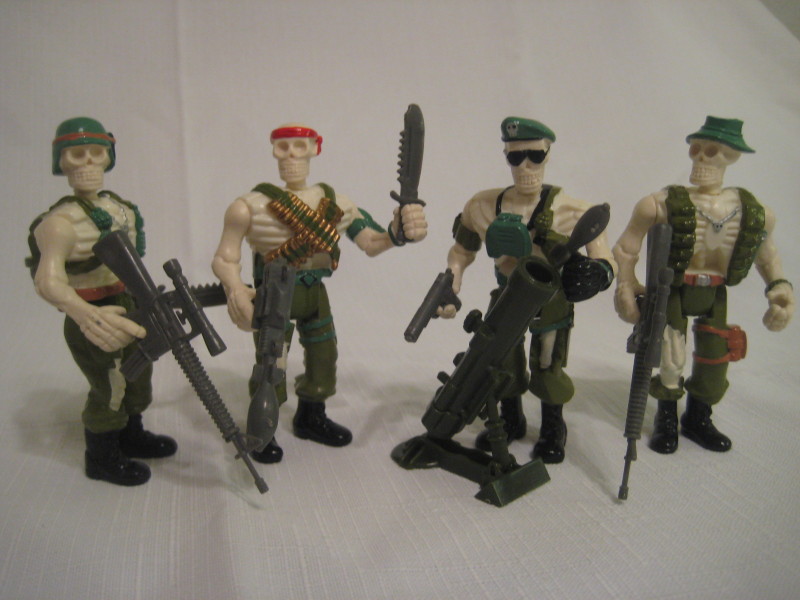 The Bone Brigade! I always got the impression this was the brainchild of some bored businessman who thought it’d be fun to fund his own toy line out of pocket. Sadly the premise of dead soldiers being reanimated by an undead overlord bent on world conquest was a little too morbid for most parents, I guess. The toy line consists solely of those brave soldiers who still retained memories of their past lives and opted to fight against their “master”.

The weapons they came with were very nicely sculpted, and their projectile weapons — bazooka and mortar — were just awesome. The mortar was especially awesome because you could adjust its angle and trajectory.

There’s a space version too, called Ghost Battalion. They too are awesome, but somehow not nearly as much as their contemporary counterparts.

EDIT: Seems the names Bone Brigade and Ghost Battalion were interchangeable. Found someone listing carded figures though, with the comics intact!